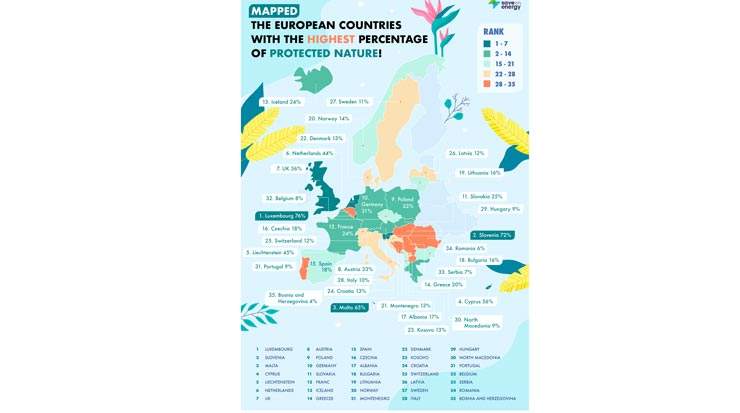 Cyprus Among Countries with Most Protected Natural Land in Europe

2020 was the year of staycations and learning to love the nature that’s around you – The New York Times recently reported a surge of European nature lovers visiting protected areas for the first time. But which country does the best job at protecting their natural sites?

SaveOnEnergy.com/uk analysed almost 80,000 nationally protected terrestrial areas in Europe, calculating the percentage of protected space per country, to discover who makes the biggest attempt to preserve their natural terrene.

Thanks to protected sites such as Geopark Mëllerdall and Naturpark the, SaveOnEnergy.com/uk can reveal that Luxembourg is the European country with the highest percentage of protected land (76 percent). Luxembourg is one of the smallest countries in Europe (2,586 km2) and is home to just 134 designated areas, but with these areas covering 1,963 km 2 they take first place.

In second place is Slovenia, with 72 percent of their country’s nature being protected, the country has a whopping 1,891 designated areas.

Malta has the third-highest percentage of protected terrestrial land in Europe! Covering 65 percent of their land, there are 250 sites for locals to enjoy such as Għar Dalam cave, Maqluba and Mdina.

Top complete the top 10 countries with the highest percentage of protected terrestrial land: